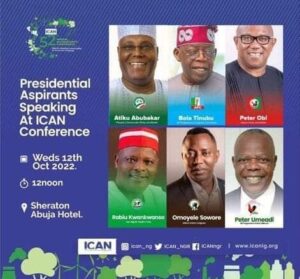 Yesterday, October 12, 2022, presidential candidates for the 2023 general election gave speeches at the 52nd ICAN conference.
The theme of the 52nd Annual Accountants Conference was ‘Nigeria: Adapting Sustainability for Economic Prosperity.’

When asked about their positions on open grazing, the LP presidential candidate responded that it is important to look at the current situation and determine if the country is benefiting from it to its fullest extent.
If not, Obi suggested, we should adopt modern practices and talk about the problem with all the parties concerned.
The AAC presidential candidate said that if elected, he would fully support ranching thank opened grazing because it is secure, safe, and a means of generating electricity.

The AAC presidential candidate responded that Nigeria will never have an industrial revolution without power when asked what he could do about providing electricity given that it is directly tied to economic sustainability.